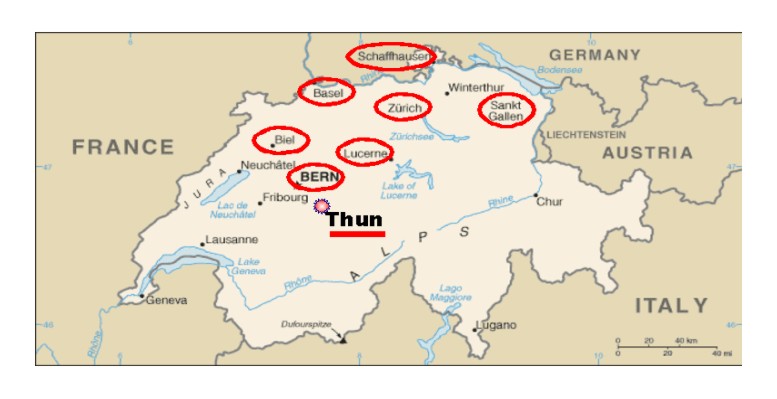 Map used by permission. The World Factbook from CIA website

The cities circled or underlined represent locations where there are churches of Christ meeting in the German speaking part of Switzerland. Links below will bring up brief histories of each of the groups meeting in these cities.

Switzerland began as a confederation of three cantons for the purpose of defense in 1291. Other areas were added to this original confederation. They earned their independence from the Holy Roman Empire in 1499. A constitution was adopted in 1848 and ammended in 1874 which replaced the confederation with a centralized government. The capital for the 26 cantons is Bern.

Switzerland is about one-third the size of the state of Tennessee. It is bordered by France, German, Austria, Lichtenstein, and Italy. It is mostly mountains with a central plateau of rolling hills, plains, and large lakes. The mountain ranges are the Alps to the south and Jura to the northwest.

Switzerland has a population of almost 7.6 million people. The country is composed of three distinct language groups: German 65%, Frence 18%, Italian 10%, and Romansch 1%. The predominant religious groups are Roman Catholic 42% and Protestant 35%.

Brief timelines for the various cities circled or underlined above: