The Park Avenue church is interested in foreign missions.  They have been a sending church, sponsoring and overseeing several missionary families through the years.  Currently the congregation has targeted Japan and helps with missions in Switzerland.

Over the years several families have been members on the Park Avenue congregation as they prepare for the mission field.  While the congregation was not able to sponsor or oversee all these family, we did provide encouragement, opportunities to learn, and sometimes one time support for their efforts.

Listed here are some of those who have come through the congregation and gone out to work on foreign fields. Some are still preparing.  May God continue to use the Park Avenue congregation to encourage and train new workers.  May God bless these who have gone out or are planning to go out.

The Hayes were both single when they came to Park Avenue, but married soon after. They endeared themselves to the Park Avenue family while working with the international ministry.

They were invited to join another family working in Cambodia. After securing oversight and raising support, they arrived in Cambodia in 2006. 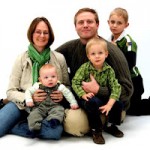 The Campbell’s were members at Park Avenue for only a short time.  During that that time endeared themselves to the membership.  They were in Memphis for Rusty to complete work on a degree at the Harding Graduate School.

They are currently in Ecuador working with another family.  You can read about their plans at the Campbell’s Blogspot.
Return to Missions Page