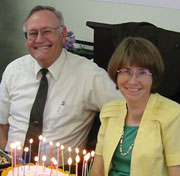 While in the Navy, Marlin became interested in doing mission work in Japan. After discharge and return to the U.S. in the early 1960s, he met Jean at Pepperdine University. They returned to Japan in 1975 to work with the Ibaraki Christian College.

They were asked to work in Tomobe, Ibaraki, to re-establish the church in that community. They have worked with this congregation since 1986. Additionally, they work with the Hitachi Christian Camp.

Marlin died in October 2018 with heart complications. Jean has continued to live and work in Tomobe carrying on the work they began in 1986. Nishimura Yasuki worked with Marlin for several years and has taken over as minister for the congregation.

The Park Avenue congregation collects and disburses support for the Rays as well as offering prayer and spiritual support.