Masa and Mari met while attending the Ochanomizu church of Christ in Tokyo and were married on October 19, 1991. Shortly after they married, they moved to Memphis, Tennessee, to attend the Harding Graduate School of Religion (now Harding School of Theology). Masa graduated in 1996 and returned to Japan in 1997. 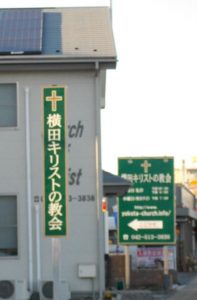 The Nonogakis have established a Japanese congregation at Yokota, a suburb of Tokyo. They are using the facilities of the Yokota Air Force military congregation. They began this work in 1999. Additionally, Masa teaches in the Japan School of Evangelism.

They also maintain a Japanese website (Bible Room) for those interested in studying Christianity. He has a new site introducing the Bible. This is a good site to point your Japanese friends to for information in Japanese on the Bible and Christianity.  He also has a Facebook page under “Masa Nonogaki“. Masa has also completed introductory studies for those desiring to become Christians and those who are new Christians.

Introduction to the Bible (in Japanese)

Introduction to Christianity (in Japanese)