3 Other Missionaries in Japan

Here are other missionaries serving in Japan who are not connected with the Park Avenue Church of Christ. We include them on our website so that others will have access to their reports and learn of their work. We have regular correspondence with each of them. 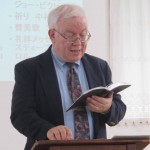 Bill Carrell, Steve’s father, was a missionary in Japan in the 1950s and 1960s. Steve spent his early years in Japan. He and Debbie returned to Japan in 1979 and worshiped/worked with the Tachikawa church until they moved to Hokkaido. After working there they moved to Ibaraki to work with the Hidaka church before going to Tachikawa. 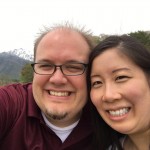 Joel became interested in mission work in Japan through a Let’s Start Talking campaign to Sendai while a student at York College. He and four other York College classmates returned to Sendai to work. They committed themselves to working with the congregation for five years.

After that time some of the group returned to the states for further study and Joel worked in various mission points in Asia. Upon returning to Japan in 2009, Joel entered into a time of prayer and reflection as he consider future work in Japan. He began working with the Mito congregation in April 2010 focusing on discipleship and spiritual formation. He and Kristin were married in 2015. 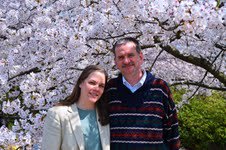 Brent and Sandy Rogers have been in Japan since 1991 working as vocational missionaries. They worked as English teachers before opening a school of their own called Logos in Kojima, Kurashiki in Okayama, Japan (west of Osaka/Kobe). Brent died on December 18, 2017, after battling cancer. Sandy continued their ministry in Kojima.