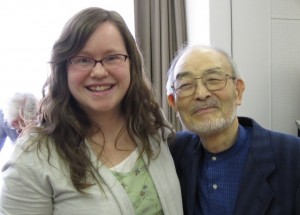 Sasha Ingle with Saito, minister for the Taga church of Christ

Following in the footsteps of past single women missionaries such as Alice Miller, Sarah Andrews, Hettie Lee Ewing, and Lillie Cypert, Sasha Ingle is serving the Mito church along side Joel Osborne, resident missionary, and Atsushi Tsuneki, minister.  She became interested in ministry in Japan through a Let’s Start Talking campaign in Sendai, Miyagi Prefecture, about 100 miles north of Mito.

Sasha was born into God’s family when she was 18 after a friend invited her to worship to meet a recruiter for York College.  While attending York College she participated in a summer mission trip to Austria in 2004 and then a LST ministry in Sendai the following year.  At that time she felt called to work in Japan.  In 2006 she participated in Friends Camp in Sendai.  After graduating from York College in 2006, she returned to Japan as a missionary intern in October 2007.

Still learning the Japanese language and culture, Sasha makes an impact on those she meets.  Please read her reports.